About the Starfleet Museum

The Starfleet Museum is an extended piece of fan fiction, created by me, Masao Okazaki, describing a conjectural history of Starfleet and the United Federation of Planets predating the original Star Trek series. Although I have attempted to be consistent with persons, vessels, and events established by my primary sources -- televised episodes and films of the Star Trek franchise (including the Animated Series) through the end of Voyager in mid 2001 -- most of the content of the Starfleet Museum is of my own invention. While I may have incorporated a few concepts and events invented by secondary sources, such as licensed and fan-produced technical manuals, novels, and gaming systems, I have made no attempt to adhere to any timeline or history they contain. The main reason for these decisions is that I wanted the Starfleet Museum to be a work of my own that could be enjoyed by all fans regardless of their access to these secondary sources, which are both too numerous and too difficult to obtain. Because the televised episodes and movies can be personally viewed by all fans at little or no cost regardless of where they live, I thought they should be the basis of the Starfleet Museum. These decisions should not be taken as a statement of adherence to anyone's notions of what should and should not be considered "canon" or a judgement on the relative quality of secondary licensed or fan-produced works; I simply decided that the Starfleet Museum needed to be built upon the solid basis of universally available primary material. Since I don't have copies of all the episodes on tape or DVD, as a guide to the primary material I've relied greatly on The Star Trek Chronology and The Star Trek Encyclopedia by Michael and Denise Okuda and The Star Trek Concordance by Bjo Trimble. Although these works contain some conclusions and conjectures I disagree with (particularly the Okudas' ideas regarding the Earth-Romulan War and the development of antimatter drives), the Starfleet Museum would have been impossible without them.

The artwork and commentaries for the Starfleet Museum were prepared with Macromedia Freehand 7 and Corel WordPerfect 3.5 on Macintosh computers.

How the Starfleet Museum came to be

I've been drawing Starships since I first watched Star Trek during its original run in the 1960s. I was also an avid consumer of official, licensed, and fan-produced technical publications, including the works of Franz Joseph Schnaubelt (The Enterprise Booklet of General Plans and The Star Fleet Technical Manual), Shane Johnson (Mr. Scott's Guide to the Enterprise), Todd Guenther (Ships of the Star Fleet), Eric Kristiensen (Jackill's Star Fleet Reference Manuals), and Rick Sternbach and Michael Okuda (Star Trek: the Next Generation Technical Manual), and FASA. However, I felt that most starships designed by fans and licensees relied too much on rearrangement (kitbashing) of the components of the original and refit versions of Enterprise. Following the examples first designed by Franz Joseph Schnaubelt, anyone could rearrange the components of a given cruiser type and come up with similar ships. However, while the number of ways that nacelles and hulls can be arranged is infinite, the number of technically sound and aesthetically pleasing configurations is finite and likely small. I soon realized that the only way to construct original, realistic starships was to abandon the Constitution class and other canon classes and to design capital ships of my own. 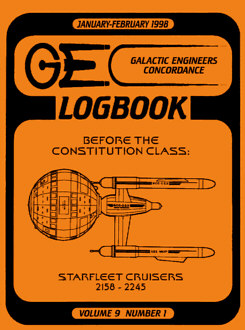 Starting with USS Daedalus, I sketched a logical progression of capital ships leading to the Constitution class. The steps from the primitive sphere and cylinders of Daedalus to the elegantly tapered lines of the original Enterprise were fairly obvious (and indeed have been drawn by other fans, such as Paul Cargile). Unfortunately, as I had only primitive drafting skills, no one except my immediate family and friends were likely to ever see my drawings. However, in 1997 I purchased the third volume of Jackill's Star Fleet Reference Manual: Ships of the Fleet and found an advertisement for the Galactic Engineers Concordance, a technology fan group. I sent a letter to GEC "Commissioner" Roy Firestone and received several past and current issues of the GEC fanzine "Logbook." After seeing the work of other amateurs like me, I was inspired to buy a computer drawing program and submit my own ship designs.

I learned to use the drawing program quickly and began to turn out fairly good black and white ship schematics. However, the harder part was coming up with technical and political rationalizations for these designs. I wanted to avoid the notion common in fan-designed ships that bigger and stronger are always better and more modern. Instead, I wanted to emphasize that starships are complex systems influenced by multiple factors, including economics, politics, and personal ambition, in addition to existing levels of technology. For my ships of the Earth-Romulan War, my original goal was to overturn the notion perpetuated by the Okudas' reference works that the War was fought by an Earth with warp drive against a Romulan fleet limited to impulse speeds. I also wanted to emphasize how technology would greatly influence how the respective sides would prosecute the war. Combat should be somewhat more complex than massed fleets flying light years at warp speeds, only to slow to impulse and fire at each other at ranges of hundreds of meters.

The first articles of the Starfleet Museum (the Wasp, Moskva, Lancaster, and Valley Forge classes) appeared in Logbook in 1998. After Logbook suspended publication in 1999, I finally got an internet connection and discovered Bernd Schneider's Ex Astris Scientia website. I emailed Bernd complaining of a small, nitpicky error I noticed at his website (regarding lifeboats on starships, I believe). He invited me to put my money where my mouth was, so I sent him my four articles. He offered to post my work at his site, and the Starfleet Museum Online was born.

I'm an American citizen of Japanese and Chinese descent who is living and teaching at a medical school in Tokyo, Japan. I've been a Star Trek fan since 1966. "Masao Okazaki" is my real name and is not a pseudonym for "Bernd Schneider." We are two different people, although no one has ever seen us together at the same time. 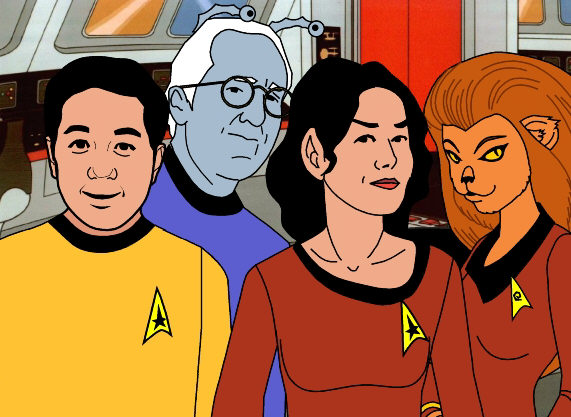 The Starfleet Museum and Enterprise

With the premiere of the fifth Star Trek series, "Enterprise," in September 2001, many aspects of my interpretation of Star Trek history will likely be contradicted by televised material. While Enterprise may yet turn out to be an exciting science fiction series, I am greatly disturbed by reports that its producers have little love or respect for the original Star Trek series. For the first 20 years of my Trek fandom, the original series and the original-cast movies WERE Star Trek. As such, the original Star Trek series remains first in my affections and remains my basis for comparing all other series. My Starfleet Museum histories were written from the point of view of a fan of the original Star Trek series, one who additionally appreciates historical change and the evolution of technologic and political systems. In contrast, the producers of Enterprise seem to have "front-loaded" their new series, set 100 years before the original Star Trek, with technologies (transporters, antimatter drives, and ship and personal weaponry) likely to function in ways indistinguishable from those of series set in the late 24th century. Furthermore, I believe that the new series was written from the point of view of Voyager and Deep Space Nine and is unlikely to respect the original Star Trek as much as I do. Of course, I respect the right of the current producers to fill in Star Trek's past differently than I have, but that does not mean that I should slavishly accept the producers' interpretation just because it has "Star Trek" stamped on it. Furthermore, since I wrote my early history of the Star Trek universe before the producers of Enterprise put their version on air, I have no intention of modifying my history to be consistent with theirs. (Since I'm living in Japan now, I will likely have little chance to keep up with Enterprise. I'm hoping for the best but expect the worst.)

All artwork, designs, and commentaries, except where noted, are the work of Masao Okazaki. Please don't repost or otherwise publish this material without permission. If any one would like to make 3-D computer models of my ships for games or for renders or to make physical scale models, you don't need my permission, but please give me credit and a link if you post them on the web and email me so I can have a look. I might also ask if I can put them in the Starfleet Museum.

I would like to thank:
- Bernd Schneider: For giving the Starfleet Museum a home on the web
- Roy Firestone: For originally publishing my articles in Logbook of the Galactic Engineers Concordance
- Thomas Pemberton: For being the official 3-D modeler of the Starfleet Museum.
- Nick Porcino, Fabio Passaro, Gene Vaughn, Skyhawk223, Brian Minosh, The Chief2K, Giorgio Libotte, Jay Hagen, Paul van Garderen, and Darrel Lawrence and the Gang at 3D Gladiators: For making models of my miserable little ships.
- Dan Carlson of The Gigantic Collection of Star Trek Minutiae for exchanging more than 500 emails with me over the past year to discuss the Earth-Romulan War and other related matters and for coming up with 400 names for warships.
- The Guys at Flare Sci-Fi Forums: For giving me a place to discuss starships and Star Trek and everything else
- The United States Navy: For making the seas safe for democracy and providing a paradigm for Starfleet
- Matt Jefferies: For designing the most beautiful ship in the galaxy
- Franz Joseph Schnaubelt: For being the first Fan-Treknologist
- Gene Roddenberry and the crew of the Starship Enterprise: For 78 episodes, 6 1/2 movies, and 35 great years
- My wife Sachiko: For putting up with Star Trek 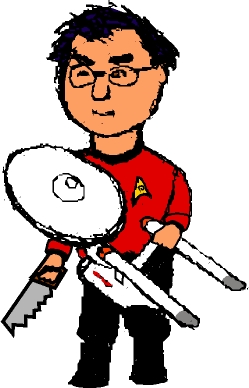