When it entered service in 2152, the fusion-powered Amarillo-class cruiser (CC-33) was the most capable warship of the United Earth Stellar Navy (UESN). However, Amarillo had been designed in a time of peace, when the mere presence of a powerful warship near a colony or convoy was sufficient to deter attacks from pirate ships and raiders. At the time, the greatest threat to United Earth (UE) security was believed to be Orion pirates operating from outposts near the Libra Colonies. 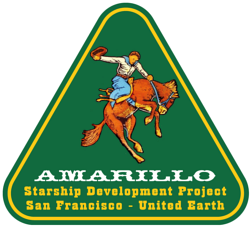 Amarillo was a state-of-the-art warship; it carried 30 offensive and defensive missiles for long-range attack and 6 laser cannons to engage smaller targets, such as fighter craft. With its 3N-9D fusion power plant and twin outboard Jaguar I nacelles, Amarillo could reach a maximum speed of wf 2.8. Thus, Amarillos were some of the fastest and most heavily armed ships in known space. Able to remain independently on station for months at a time, Amarillo made an effective patrol cruiser to protect Earth's outer colonies from piracy.

Unfortunately, Amarillo was not the ship the UE needed to prosecute a full-scale interstellar war against a ruthless, determined, and technologically advanced enemy. At the start of the Earth-Romulan War in 2156, Romulan warships carried larger missile complements and crews, were equipped with faster warp drives, and operated in far greater numbers. At the start of the war, 10 Amarillo-class cruisers were in service with the UESN. As the Romulan invasion threatened to overwhelm the UESN in the first 20 months of the war, Amarillo cruisers hurled themselves again and again against the invading Romulan fleets in an attempt to blunt the force of the attack. Although Amarillo was a technologically robust design with more precise weapons-targeting systems and superior maneuverability, it was outclassed by the larger, better armed, and more numerous Romulan Cabbage-class cruisers, but could still inflict considerable, often lethal, damage on enemy vessels. By the time Amarillo was finally withdrawn from front-line service in March 2158, 18 of the 25 ships constructed had been destroyed—an astonishing loss rate of 72%. Yet, thanks in large part to the dogged resistance of the Amarillo class, the UESN, and the UE, survived. As the UE-Andor alliance finally went on the offensive in mid-2158, the surviving Amarillo cruisers were relegated to support roles as newer, more capable ships—powered by the new M/AM reactor—continued the fight.

The most notable ship of the class was UES Kursk (CC-35), the first UESN ship to engage Romulan warships in combat. In 2152, UE Intelligence began receiving reports of an unknown race aggressively expanding into systems antispinward of Utopia colony. Kursk escorted the surveyor UES Zheng He (CX-26, Republic class) and the deuterium tanker UES Lysithea (AD-16, Atlas class) on a mission to chart the Gliese 480.1 system (now known as the Taugus system), believed to be a staging area for alien activity. As they approached the system on April 13, 2153, they were confronted by a force of 5 large warships. Before the UESN ships could establish communication with the approaching ships, the aliens opened fire. Zheng He was destroyed with the loss of its entire crew, but Kursk fought off the assault and fled the system with Lysithea. Although full-scale war would not break out for another 3 years, the Earth-Romulan conflict had begun.

The Amarillo-class cruiser UES Wolverton (CC-47), a veteran of several actions in the Utopia and Taugus systems, is on display at the Starfleet Museum.