The final Bison-based ships to be built during the war were the Conqueror-class cruisers (CHM-69). These cruisers, introduced in 2159, were basically improved Tannhäuser-class ships with smaller, more powerful SSWR-III-D reactors, new Typhoon B2 warp nacelles mounted outboard above the centerline, and an upgraded sensor suite. New weapons included a forehead-mounted, high-velocity "missile rifle" with a rotary feed system and a ship-to-ship version of the Ultra Zeus ground-attack laser cannon first used in the Farragut class. 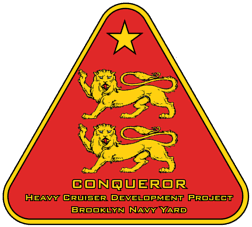 These immense cruisers provided valuable service during the last year of the war. Leading numerous task forces ever deeper into Romulan space, Conqueror launched steady missile barrages that were instrumental in the destruction of the Romulan fleet. Conquerors served most prominently at the Battle of Cheron in August 2160, where a massive UESN task force ambushed a Romulan fleet in its staging area and eliminated the remnants of organized Romulan resistance. This defeat left the Romulan homeworlds open to UE invasion and forced the Romulan government to sue for peace. 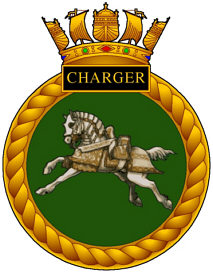 However, after the war, Conqueror cruisers proved prohibitively expensive to maintain and crew in large numbers. Most Conquerors were decommissioned in 2161. Only 5 ships were transferred to Starfleet to serve as a deterrent against renewed Romulan aggression. The deterrence force continued to patrol the Neutral Zone until 2170, by which time they had been replaced by the new Dragon-class heavy cruiser.

The Conqueror-class heavy cruiser UES Charger (CHM-72), which was the flagship of Task Force 41 during the final drive towards the Romulan Homeworlds, is on display at the Starfleet Museum.