Historians have referred to the early 23rd century as the "imperial era" of Human history, when territorial expansion was pursued with reckless abandon. To support this expansion, the Human leaders of Starfleet built the mighty Lancaster cruisers to defend far-flung colonial outposts from other powers that might have considered themselves the rightful owners of these newly settled worlds. Although the 50 Lancasters were already the most powerful ships in service then known, the Federation sought even larger, faster, more heavily armed ships.

The resulting Quetzalcoatl class of "semidreadnoughts," which entered service in 2215, were indeed extremely powerful, but are considered to have fallen short of the ambitious goals of their designers. Although the Quetzalcoatl cruisers were seemingly constructed to follow Theodore Roosevelt's advice to "walk softly and carry a big stick," they were, in the words of historian Pere Silvestri, "the stick that was too big to carry."

The development of the Quetzalcoatl class was largely due to the vision of a single man, Admiral Guillermo Cajal, commander of Starfleet's 4th Fleet. In 2211, Admiral Cajal and his staff developed the concept of the "space control ship," a powerful starship that, by its very presence, could pacify entire sectors of space. This pacification would be established and maintained by a combination of great speed, long-range weaponry, and swarms of onboard fighters and attack craft. Admiral Cajal had been inspired by stories of the titanic battles between the aircraft carriers of the United States Navy and the Imperial Japanese Navy in Earth's 20th century. These massive ships, and their even larger descendants of the next hundred years, had been able to project national power and prestige around the world. Admiral Cajal reasoned that a fast starship combining a large air wing with overwhelming missile and energy beam firepower could be a truly formidable weapon that could control as much space as two or more Lancaster cruisers.

During the Quetzalcoatl's preliminary design phase, a serious problem arose in relation to the new ship's proposed warp drive system. Despite matter/antimatter (M/AM) reactors of the 2210s being nearly an order of magnitude more powerful than first-generation reactors developed half a century earlier during the Earth-Romulan War, reactor output was no longer increasing in proportion with reactor weight and size. (Power had, in fact, decreased with reactor weight as reactors became more efficient from 2160 to 2180.) In other words, although reactors were increasing in power, their size was increasing even more quickly. Although Quetzalcoatl was to have a flank speed of at least wf 7.1, exceeding that of Lancaster (maximum speed, wf 6.4), simulations revealed that this speed could not be achieved simply by scaling up existing reactor designs. In addition, the most powerful nacelles available, the Centaurus units used for Lancaster, had already reached their limits of subspace field strength. Scaling up these nacelles or increasing their number would not result in higher speeds. Therefore, for Quetzalcoatl—and future ships—to achieve speeds approaching wf 7, more efficient reactors and more powerful nacelles would be needed.

The resolution to this dilemma required a compromise that was not entirely satisfactory. Quetzalcoatl's dimensions were scaled down overall by approximately 10%, which decreased internal volume and weight by approximately 30%. Even with this weight reduction, a top speed of wf 6.6 could only be achieved by mounting a third, auxiliary mininacelle at the base of the secondary hull. This small third nacelle caused Quetzalcoatl to be called a "semidreadnought" to distinguish her from true dreadnoughts that mounted three nacelles, such as the later Siegfried class. 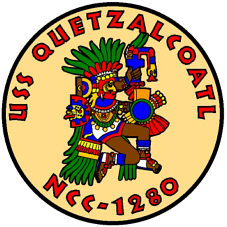 However, when Quetzalcoatl joined Starfleet in 2215, its lower than expected maximum speed provided more ammunition to critics who had already charged that the Quetzalcoatl was too large and too expensive and would never reach its projected performance levels. Admiral Cajal eventually accepted the truth of these charges. As a student of 20th century military technology, he recognized that trying to break the wf 7 barrier with existing technology was no less futile than trying to break the sound barrier with propeller-driven aircraft. Because of Quetzalcoatl's decreased maximum speed, it could not perform the functions of two Lancaster ships and, indeed, would likely be significantly more expensive to crew and maintain. Admiral Cajal agreed to decrease the number of ships built from 20 to 5, pending the development of more efficient and powerful reactors and nacelles. However, such improved drive systems were not to be available for a further 10 years, when USS Valley Forge (NCC-1463, launched in 2227) introduced a new standard for starship speed with her Merlin nacelles and SSWR-XI reactor.

Quetzalcoatl displaced nearly a quarter million tons and would be the heaviest Starfleet cruiser until the launching of Pyotr Velikiy (NCC-1670) in 2242. The primary hull had an unusual 36-m-tall "cathedral dome" with a volume of 150,000 cubic meters. This enormous space housed most of Quetzalcoatl's airwing of almost 90 landing craft, fighter/bombers, and personnel shuttlecraft which was four times as large as that of Lancaster. Quetzalcoatl was also home to some 400 Starfleet Marines along with their power-armor and vehicles. On board weaponry included 48 of the newly developed photon torpedoes and 88 warp-capable fusion-tipped missiles. The hulls were studded with 10 phaser turrets. To aid fire control, Quetzalcoatl carried a dedicated target acquisition and tracking sensor in the front of the primary hull. The secondary hull was long, tall, and narrow and continued the trend introduced by USS Asia (NCC-945) of having a deep curved ventral aft undercut. At the front of the secondary hull was mounted a large-diameter, long-range Cyclops navigational deflector. The massive SSWR-IX M/AM reactor drove the two Centaurus nacelles and the single midline Centaurus Junior mininacelle.

The shortcomings described here are not to suggest that the Quetzalcoatl class was a failure but simply that it could not perform the ambitious role that had been intended by Admiral Cajal. The five Quetzalcoatls that did enter service proved extremely valuable in situations in which their immense offensive firepower could be brought to bear across a limited front. For example, in 2229, a squadron led by USS Huascar (NCC-1284) was instrumental in breaking a Klingon blockade around the besieged Federation colony at Kel 4.

The experience with the Quetzalcoatl class showed only too well the difficulty of combining the functions of a fighter carrier and a heavy cruiser in a single ship. Because these functions are for the most part mutually exclusive, any ship attempting to combine them usually ends up being less effective and more expensive than two ships with separate functions. After Quetzalcoatl, Starfleet would never again attempt a ship of this type, but instead would build ships that were exclusively carriers or heavy cruisers.

The Quetzalcoatl-class semidreadnought USS Viracocha (NCC-1283), the last ship of the class to be withdrawn from service, is on display at the Starfleet Museum.