The Ocean class of large transport ships had its origin in the Elephant class of 2158, a proposed development of the never-built Scimitar-class heavy cruiser. As the United Earth Stellar Navy (UESN) began its drive towards the Romulan homeworlds in 2158, the United States Rocket and Spacecraft (USRSC) Corporation, builder of the venerable Bison family of starships, started design work on a new heavy cruiser, the Scimitar class, to follow its Conqueror class, which was scheduled to enter service in 2159. For reasons of expediency and continuity of production, Conqueror used the cylindrical Bison hull introduced in 2145, despite having a third-generation matter/antimatter (M/AM) reactor that allowed a sustained speed of wf 3.1. UESN engineers correctly believed that a more warp-dynamic hull would allow even greater speeds with the same reactor and nacelles. The resulting Scimitar-class design featured a gently tapering hull with a hemispheric 33-m-diameter sensor shroud at the bow and an ovoid reactor housing at the stern. Scimitar was to use the SSWR-III-D3 M/AM reactor, a scaled up version of the SSWR-III-D reactor, and the same NPO Energomash Typhoon B2 nacelles used by Conqueror.

At this time, the Olympus Mons class was the most numerous transport ship in service with the UESN. The Olympus Mons class (known to crews as the Baby Bison), itself a development of the Bison class, had a shortened but deepened payload hull, outboard Jaguar IIIa nacelles, and a second-generation SSWR-III-C M/AM reactor, which allowed a sustained speed of wf 2.9. However, task forces were often limited to the speeds of their slowest ships, which were most often the Olympus Mons transports, For this reason, the UESN Admiralty Board began considering a new class of transport that could more easily keep pace with the capital ships that were already in service or were expected to enter service in the early to middle 2160s. Rather than inviting new design submissions for this new rapid transport, the decision was made to base it on the Scimitar-class heavy cruiser that was under development.

The new UESN transport, which was officially named the Elephant class, was to have a 33% greater payload than Olympus Mons and be capable of a cruising speed of wf 3.1. The ships were to be built around the SSWR-III-D3 reactor and Typhoon B2 nacelles. However, with the unexpectedly rapid collapse of Romulan resistance in 2159, the Admiralty Board decided that sustained offensive operations and the successful conclusion of hostilities would best be achieved by continuing the production of heavy cruisers and transport ships soon to be or already in service. Therefore, in a single step, both the Scimitar and Elephant classes were cancelled.

When the war ended in 2160, the UESN began a rapid force drawdown in preparation for its evolution into the less-martial United Federation of Planets' Starfleet. Almost all large cruisers capable of long-range strike operations were retired, destined for the breaker's yard or local defense forces. Accordingly, any plans to construct a new class of large cargo ships were put on indefinite hold, as Starfleet's spacelift needs were expected to be more than ably fulfilled by the 25 Olympus Mons transports (as well as several M/AM-converted Bisons) to be inherited from the UESN. A replacement for Olympus Mons was only to be considered when these ships neared the ends of their service lives in another two decades. 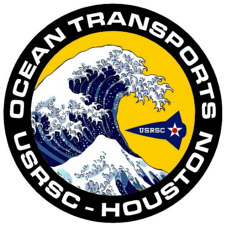 However, owing to rapid advances in starship engineering in the postwar period and the Federation's rapid spread outward from its core, Starfleet invited submissions for a new group of large transports, to be called the Ocean class, in 2168. The specifications for the new ship were almost identical to the nearly decade-old specifications for the Elephant class, the primary differences being the deck orientation (horizontal instead of vertical) and the slightly higher speeds (cruising speed: wf 3.2; maximum speed, wf 3.6). Because the power train was to comprise variants of the SSWR-III-C reactor and Typhoon B2 nacelles used by Conqueror, improvements in performance were to be achieved mostly through improved hull warp dynamics rather than through significantly increased reactor power and nacelle subspace field output. The first of the 75 Ocean-class transports were scheduled to enter service in 2170.

Although the Ocean class was intended to be faster than either Olympus Mons class or the unbuilt Elephant class, it was also intended to be significantly slower than the front-line cruisers that were already in service or were expected to enter service during its lifetime. The main reason for this limitation was that fast transports and support ships, which were able to keep pace with cruisers to either establish forward bases or keep cruisers supplied for combat, were considered to provide an inherently offensive capability that was inconsistent with Starfleet's peaceful missions of exploration, colonization, and defense. Such missions did not require extremely fast transports.

As had long been expected, the contract for Ocean was won by USRSC. Despite nearly a decade of advances in starship engineering, USRSC's winning Ocean was curiously old-fashioned. Critics charged that USRSC had grown complacent with a steady diet of UESN contracts over the last 25 years, investing little in research and development and falling behind other shipbuilders. Despite this criticism, USRSC's legacy of being UESN's preferred builder of large starships was strong enough to win the Ocean contract with the new Starfleet. (However, USRSC would not build another major class of large ships for Starfleet for 75 years.)

Ocean's hull was still basically cylindrical, which greatly simplified construction, with only a small concession to new theories of warp field dynamics in the slightly drooped tail below the aft shuttlecraft bay. Still, Ocean remained a transitional design, with deep roots in the fusion era and rather timid explorations of new technologies required for M/AM flight. Historians have compared Ocean, as well as many other early M/AM-powered starships, to the earliest jet aircraft, which were powered by an entirely new type of engine yet retained the straight wings and inherent limitations of the propeller age.

The lead ship of the Ocean class, USS Pacific (NCC-T79), named for the largest ocean on Earth, entered service with Starfleet's Transport Command in September 2170. Its shakedown cruise, from the USRSC shipyard in orbit above Houston to Alpha Centauri, took only 48 days, a great improvement over the 150 days needed by the original fusion-powered Bison and the 72 days required by Olympus Mons. By and large, Starfleet's Transport Command was pleased with Ocean, particularly with its SSWR-III-E2 reactor, which was much more reliable than the often balky SSWR-III-C reactor of Olympus Mons, and its enormous cargo capacity. A single Ocean could deliver the infrastructure and supplies for an entire planetary or orbital starbase, along with its construction and service personnel, whereas as many as three Olympus Mons ships had been needed a decade earlier. By the end of 2171, 5 Oceans had entered service, with the remaining 70 ships to be delivered by 2185.

The introduction of the Sozvezdie fast transports by the civilian passenger line Kosmoflot in 2171 changed everything. Thanks to a highly warp dynamic hull and a high-output Rama V reactor, Sozvezdie could effortlessly cruise at wf 4.0, allowing it to make the Earth-Centauri run in 25 days. The speed of interstellar transport had tripled in a decade, making Starfleet suddenly covet a high-speed transport capability that it had earlier rejected. Indeed, Starfleet would not have an exploratory cruiser able to reach such speeds until the Moskva class entered service in 2179. Rather than attempting to develop a new fast transport from the keel up, Starfleet decided in 2180 to place more powerful reactors in all new Oceans, to end production of Ocean at 50 ships (NCC-T45 to -T94), and to supplement them with 50 military versions of Sverh Sozvezdie, which would be known as the Constellation class. USRSC was, of course, disappointed by this decision, but did receive from Starfleet a contract-cancellation fee equal to one-third the cost of the unbuilt ships.

USRSC was now free to market a civilian version of Ocean as the Superbison. With the introduction of faster, smaller transports such as Sozvezdie, there was little interest in an all-passenger version of Superbison, which would have carried some 1,500 passengers at a cruising speed of wf 3.2. However, cargo-carrying Superbisons did prove popular for interstellar transport of non-time-sensitive commodities, such as mineral ores, chemicals, and bulk foodstuffs, and for colonization efforts. Superbison sales were hurt somewhat by the durability of the original Bison class ships, some of which continued in service well into the 24th century. Operators saw no need to invest in a Superbison when existing Bisons could be upgraded to perform at slightly lower levels but at greatly lower cost. However, by the time production of Superbison ended in 2205, more than 300 had been produced, including a large number of variants.

Despite their less-than-glamorous reputation, Oceans, with periodic upgrades and refits, continued to serve Starfleet reliably and with little fanfare until the 2230s, after which the remaining ships were scrapped or sold to civilian operators. Oceans still serve in many civilian fleets inside and outside the Federation and will likely continue to do so for many years to come.

USS Tethys (NCC-T88), the last Ocean-class ship to be produced for Starfleet, is on display at the Starfleet Museum.